Last minute decision was made on my part to see this show. But reasoning said to me, "How often does a band from Cleveland come out to play?" It cost them a ton of money and time, and I needed to show support. Besides, it was an early show, and I would be home at a very reasonable time. They had another show booked the same night in West LA which is actually closer to my home. But that line up was not enough for me to get excited about

When do punk shows start on time? I drive up to the front of Headline at exactly 5:00 p.m. when the show is supposedly going to start and notice that the show has started! I drive around a couple of blocks to look for parking. Most people around the area know that it is a pain in the ass sometimes to find parking on Melrose. I finally find a spot about three blocks away and grab my camera bag out of my car. Realizing that time is the essence, I also grab my skateboard so I can make up some time. I fly to the store on my skate, hoping I don't hit a rock and eat shit. I make it safely into the record store and fumble through my bag to get my camera out. The crowd is large today. A mass of people were packed tight to hear their hardcore fury. I look at my camera, and I realize I didn't load the film in. I dig in my bag to grab some film and try loading the film. I am having problems loading the film. I look up in anxiety and Reagan SS has wound up their set. Fuck! I didn't get any pictures! 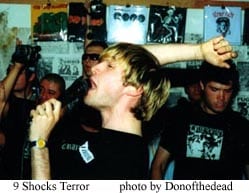 People file out of the record store since the heat level well surpassed the 100 mark. I bump into my brother who helps me load the film in my camera. I notice that he has a camera with him and ask if he took any shots. He said he did, so that is where I got the Reagan SS photos. I bump into Matt Average, singer of Reagan SS and a Razorcaker, and he says that they have another gig in San Diego. That was the reason why they started exactly at 5:00 p.m. I bump into people I know and ask of their reactions of Reagan SS's set. People were telling me they were tight and are getting better and better after each gig. I'm a shmuck; I should have left my house earlier. 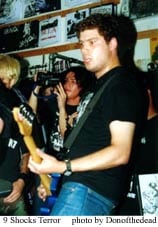 9 Shocks Terror set up and introduced themselves to the mass of people who joyously assembled in front of them. Once the first note hit, the sea of fans pushed forth as a pit formed in the middle of the room. Sheer heartache energy was blasted through the amplifiers and monitors. They played their blend of Japanese hardcore mixed with their personal touch of manic groove beats of rock. The crowd was almost out of control. Singer Steve crowd surfed when there was no stage to jump off from. Bodies piledrived into each other mimicking the energy of the music. The singer of now defunct Life's Halt, I think his name is Ernie, was in the pit donning a wresters mask. Martin (Limp Wrist/Los Crudos) was out front barely holding his balance while he screamed along. Fun was enjoyed by all. On the last song, Thrashead, Headline employee and drummer for NOYFB and others, grabbed the mic and took over vocal duties. The afternoon of organized mayhem was now complete.

It's sad that there are not very many venues to support the more underground genres of punk rock like thrash, crust, or fastcore. The energy level minus the jock factor is what made this gig great. People lost their minds and still had a great time. This is what keeps me excited after all these years. Afterwards I talked to a bunch of people about their views of punk as we milled about in the store and it confirmed to me that this scene will not die. 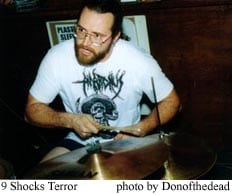