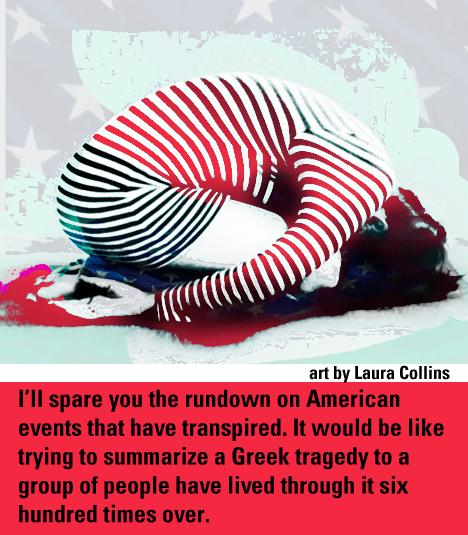 Anxiety in the Time of Trump by Jamie L. Rotante

I began writing this at 11:47 AM on Friday, January 20—Inauguration Day. Reminders came in a steady stream from news outlets that  in the following four minutes, the new president of the United States of America would make his speech. I did my best to actively avoid 11:51 AM, but how could I really turn off the world and ignore events of this magnitude? And even if I could—how would that really help?

I resumed writing this on February 3. I’ll spare you the rundown on American events that have transpired since. It would be like trying to summarize a Greek tragedy to a group of people have lived through it six hundred times over. But this is an article about anxiety and, hoo boy, is that ever relevant right now.

Writing this was tough. There’s so much shit happening right now that talking about my issues seems selfish. Pretty much the entire United States is suffering from anxiety. What makes mine special? By all accounts, my status as an American is less worrisome than others under the current regime. I’m white, Christian, American-born, and straight-identifying. If it weren’t for the pesky little fact that I have female genitalia, I’d be pretty much made in the shade. Who am I to even speak about a national anxiety when I’m higher on the totem pole than others?

Therein lies the answer: I’m incredibly anxious because there’s a totem pole. Because we now live in a country where being a white, upper class male makes you a superior species. I’m anxious because of the understanding that throughout our history we never were a country that didn’t place superiority on a white patriarchy. Anxiety was in my blood from the moment I was born into a country that, despite championing itself as a beacon of freedom and hope, will still tell me I matter less. And that I should be grateful I still matter more than others. National pride is an acceptance of superiority. National pride is an admittance of guilt.

And let’s face it: I’m also anxious because I’m fucking scared to death that this is the beginning of the end.

Every day I read through op-eds and news from different websites, trying to convince myself we’re living in some Wag the Dog-esque conspiracy where nothing is real, and “fake news” is the only news that exists, because that’s somehow more comforting than believing everything that’s happening is real. For once I get it. I get why conspiracy theorists dedicate so much time and energy into what they do: it’s so much easier and safe to assume the entire world is in on something beyond our control; that no matter what happens, the powers that be pull the strings. That no wars or attacks are real; they’re all manufactured to get us to believe a certain thing—whatever that “thing” may be. It’s better than acknowledging half the country willingly chose—and continues to back—a man who sees no value in the lives of non-whites, women, the working class, other countries or—anyone, really, except for himself and his elite circle—namely those who allow him to remain wealthy.

What’s funny, though, is that Trump is like a conspiracy theory nightmare come to life. He’s the living, breathing, walking and (unfortunately) talking embodiment of the evil mastermind behind a New World Order. (Okay, I take that back, that description might better suit Bannon.) There’s no humor or hiding behind delusional conspiracy theories, it’s all a little too real and it’s all very overwhelming, to say the least.

Checking the news as I read this on February 9 makes certain Bannon/Trump’s intent to start a nuclear arms race. Just what I’ve always wanted! What once seemed so ‘80s, now seems real. As a kid, I spent a lot of time dwelling about the end of the world, or the possibility of nuclear war. I blame it on being part of a post-Reagan, post-cold war world where we as Americans had a crazy obsession with a Russian takeover. I was obsessed with the apocalypse. Call it a symptom of being that perfect “coming of age” age when Y2K was a thing. My voracity for reading tabloids didn’t help as they warned of end times on a near-daily basis. My Catholic upbringing also contributed, as my decision at age eleven to casually flip through the book of Revelations may pinpoint the start of my panic attacks.

If I felt small and scared in a world where these matters seemed to be far off, now it’s worse than ever. The only difference is that, when I was a kid and the world seemed like too much to bear, I’d always have the comforting words of an adult (namely, my grandma) to make me feel safe again. But I don’t have that option anymore. Now I must be the adult and console myself. Frankly, that’s getting difficult to do.

I see my friends’ smart, albeit worrisome, posts on Facebook about the news. So, I delete the Facebook app from my phone. I read opinion pieces from powerful political figures and movements and I doubt their effectiveness. I hold conflicting thoughts in my mind about the nature of things to avoid the echo chambers. I sit and do nothing. I tell myself one day I’ll help make the world a better place, then I fall asleep and hope the next new day will bring with it better news. It never does, and I just end up hating myself more and more for it.

My heart swelled with joy when I saw footage of the Women’s March. A little piece of me feels the tiniest glimpse of hope when I see people rally together and work for progress and change. It also makes me realize how little I contribute. If the impending doom of foreign affair nightmares and stripping of civil rights can’t galvanize me to just get over my anxiety, then what will? My silence means I’m just another part of the problem. And that gives me even more anxiety. I’ve always felt like a small speck in mankind—I mean, aren’t we all? But my place, especially as a woman, made me feel even more insecure. Now it’s proven I matter less. If my voice was already stilted and unsure, what does this mean now when even a confident woman will be undermined every step of the way? Confident women have always been undermined.

The truth is, I can’t just start being confident and give up anxiety like quitting smoking. I’d love to discover my voice as a reaction to Trump, though I fall back into the negative headspace of doubting its effects. I need to learn to speak despite Trump. I need to reach out, write letters, send postcards, smile at strangers, keep sharing my stories, because, deep down, I do still believe in power in numbers. Maybe my singular voice won’t be enough to create change, but many voices like mine can make some dent in the system.

Or I’ll give into the panic and create a “safe space” of my own—a delusional space where I just accept the fact that lizard people always have been and always will be the ruling class—and nothing I can do will change that. That should make me feel all better, right?