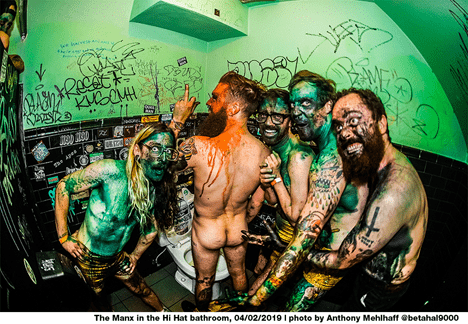 I’ve seen plenty of bands over the past year but there is only one band that I’ve seen over ten times. And they just keep getting better and crazier and gooier every single time. I’m talking about the pus-punk, goo-core, Slug Boys from another dimension—Zach Zdziebko, Adam Barnes, Myke Chilian, Tommy Meehan and Max Winston—know as The Manx. There isn’t a punk band this strange and original on this planet or on any other, and I triple-dawg dare ya to try and find one. Go ahead. I quad-dogg dare ya!

I first saw this boy-buffet, splattered and mattered in mush and glop to a crowd of ten maybe twelve people at a DIY music and art space known as NPU (Non Plus Ultra).  I couldn’t believe no one was there. “How are these goo-dudes a secret?” I thought as the mix of slimed bodies, speed drums, and odd instrumental combos perforated my ear meat. Upright bass, electric banjo, electric mandolin and accordion stuck to my brain like a booger above a gas station urinal.

I immediately bonded with the boys and in a couple of shows I was taking part in their pre-show goo ritual which involves being aggressively spat upon with polychromatic fluids before marching back into the venue and losing all your shit at once. The best part is you have the physical marks to remind you of the show and they are not easily removed. The stains of the goo only last for a few days, but the memories of the show will never fade.

This one is from an on-going series of shots all taken after the boys completed a show and we make a photo in the turd house. I love this picture because it captures all of the boys’ varying personalities in one single image. It’s almost as if they are a mixed-up set of super weirdos. This picture was taken after their first of four residency shows at The Hi Hat and this one was an especially slimy and utterly fantastic performance. Spirits were high, bladders were full.

From their unique sound, insane stage presence and performance, to their self-funded albums, music videos, and merch, nothing about these mucus men is habitual.

The Manx are about to release their newest full-length musical secretion, Malibu Slime, out July 14 everywhere. But for those who really like to party, The Manx has teamed up with the gods of found footage and The Wizards of Odd, Everything Is Terrible, for the Malibu Slime release party, featuring video segments, puppets, and all types of weird.

If ya dare, come out and see how ya fare. It should be a real cute night.