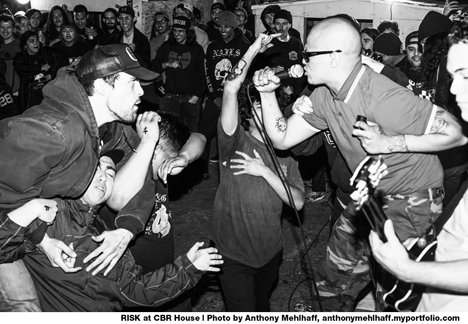 Positive. Mental. Attitude. Talk shit, get hit. Seems like the mantras of a soccer mom and her hard-nosed kid. These ideas seem to be at ends with each other, but when these two songs from this straight-to-the-point, hardcore punk outfit RISK are sung with young people smashing into one another, shit just seems to work. This idea that you can be extremely positive and also not willing to take any fucking shit is why I like this band. They also fucking rip—and god damn—I can’t fucking wait to see what they do for their debut album. Their music is strong, clean, but not overly produced and has a retro ’80s punk feel to me, but somehow without being recycled or regurgitated like so many bands that play punk now. They also have a harder lyrical edge that seems like the lead singer has seen and done some shit—and is learning and making music from his experiences. I got all this from four songs. Fucking four songs and I’m hooked! A demo, really!

I love this photo because the dude bottom left who’s smashing that other dude looked at me as RISK began to play and said, “Best fucking band in L.A.,” as he pointed up to his DIY trucker hat that had a tag logo for RISK. Five seconds later that dude, (who I later found out makes a zine called, Powerline and also thru the show) was stage diving and slam dancing all over that dusty backyard. This was my second-to-last pre-corona virus show and it was a fucking doozy.

That night, Drain shot their DIY music video for their debut album on Revelation Records for the banger song, “California Cursed.” Section H8, Combat Shock, and Dead Heat also played and rounded out this loony night. All these bands are headliners in my books and this night was stupid, dope. STUPID.... DOPE!