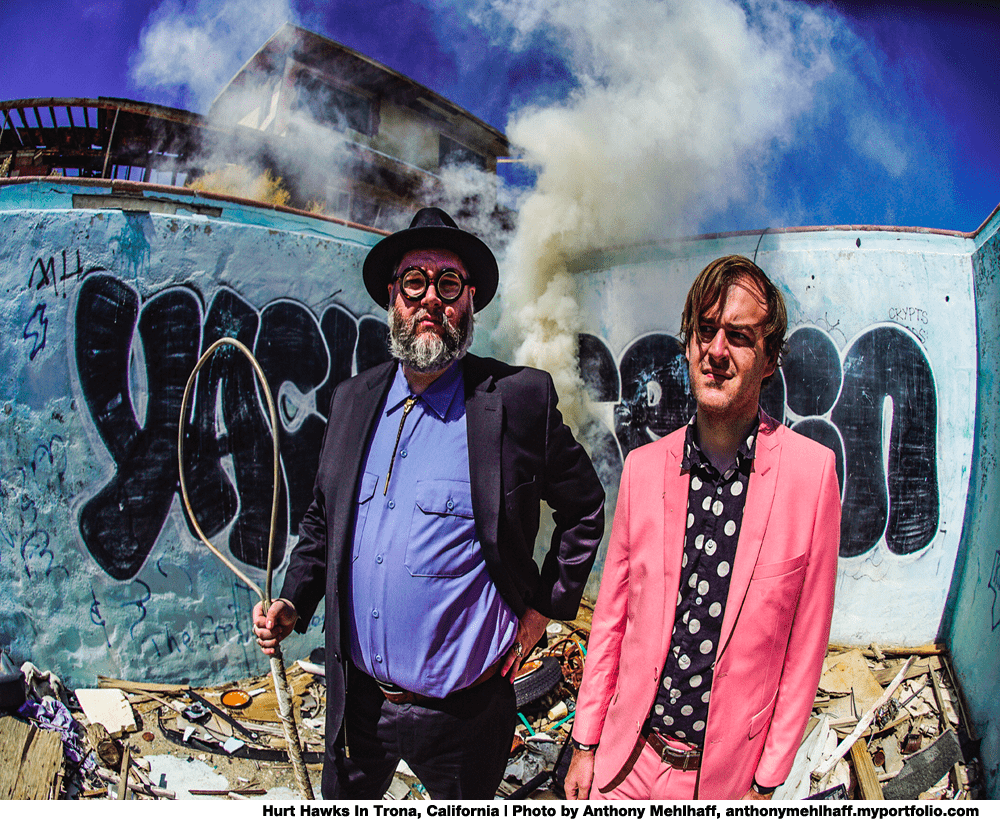 Bolt-cutters, fire accelerant and a good fucking attitude. What a winning combination.

This pool was so deep we had to find a twelve step to get in and out of the fucker. The ladder was on its last leg but was also on the abandoned property. Score. We climbed down in, ignited a smoke flare, and snapped this gem.

There are places in California where you can do non-city things. Trona is one of those places.

Any chance I get to whisk off to a weird and distant land where laws seem as murky as your great Aunt Edna’s dead eye, then count me in. For this photo I was challenged with coming up with some album art for my homie Joel’s two-piece band, Hurt Hawks. I hate shooting in studios so I said, “Let’s drive three hours away to Trona, Calif., and Joel and Jake (the beats half of Hurt Hawks) were all in.

We started the day with a breakfast and a place called Crazy Bill’s or Bob’s or some shit. Was great to have breakfast at a restaurant with other humans. (All of us vaxed—at least first shot plus two weeks—and Joel being fully taxed.) I’ll add that no other patrons were in the joint till we were about to leave and the workers were masked. The sense of guilt I had was and still have is immense but, hey, at least I’m not throwing huge shows during a pandemic and claiming to be, “punk.” Fuck #magapunkrockrallies. Sorry, I write this on Easter Sunday and last night a bunch of Maga Punk Rockers threw a huge super spreader event under the guise of “community outreach.” But that’s another story for another day.

After breakfast we continued the journey and found an abandoned RV I located months earlier while on scout. A few snips of a barbed wire fence and thirty minutes later we had our first images and feeling good about the quality of the snap. We decided to keep the good times fucking rolling and headed two more hours up the road.

Imagine Trona as a no-bullshit Joshua Tree with no latte spots or souvenirs. It’s the kinda of place that is hanging on to life but just by a string. It’s on a fault line and is crumbling into the ground. Wild dogs chase after your car. Tweakers tweak in the light of day—the day-walkers. All shops close on Sunday because, well, of course they do. And there are two cemeteries and nine churches. But it’s not all bad. The burger place is killer and the locals don’t give a fuck if ya climb all over the abandoned houses that are falling into the earth. I love it. I honestly think if I ever come into some money, I’m gonna buy the entire fucking town.

Anyways, we landed at the second location. A weird super deep pool that went bone dry years ago right next door to a “God Loves Trump” house. We took many photos—including the one featured in this article—and no cops, no gunfire, and no Lookie-loos, except for a trio of little foster kids, one of which asked a ton of questions, none of them that I could de-code. I gave the rascals some stickers and, feeling even better about our second location, went into town for some greasy eats.

I live in a world that doesn’t close down for fake clowns from magical books and forgot that towns do that shit. Like in 2021. Motherfuckers still close down for the Sabbath. What the holy fuck!? Our day had turned a bit sour and wanting to end on a high note, we grabbed some bullshit from the lil’ mart, including Lady Gaga Oreos, (that shit don’t sell well in Trona”) and searched for one more location.

Not far up the road, remembering that I had fire tools, I had the caravan pull off a dirt and gravel road behind me and prepared to figure out our last shot when in the brush, I spotted a grey suitcase. My mind went straight to a shit-bag murderer named Issei Sagawa who murdered his French tutor in cold blood, then did a bunch of fucked-up shit to her corpse, and ended up jamming her remaining meat into a suitcase in the park on a hot day a lot like today. The suitcase ended up not having human remains in it, which was both a relief and kind of a let down.

We took some more photos of which might be on the upcoming Hurt Hawk’s album being released later this year that I highly recommend you check out. Hurt Hawks—their music is a special trip and I bet you won’t hear anything like it. I fucking dare you to search it out. I also dare you to travel to Trona, not just the pinnacles, but to the actual town.