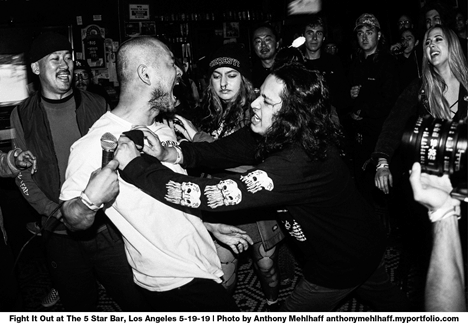 Anthony Mehlhaff Photo Column—Fight It Out

You know when you meet a bunch of folks who are from an entirely different part of the world than you are but it seems like you grew up together? Ya, never happened to me either, until I met the Fight It Out crew and smashed around a powerviolence pit with them. Male bonding through heavy music is a real thing and I’m not embarrassed to admit it. Love is love, bro.

Yang—you beautiful Japanese sweetheart. This photo can only try to paint a moment of what it was like to witness your chaos live and in the flesh. You and all your homies made me feel so welcome in YOUR family and it all started when I noticed your Beyond Pain (L.A. powerviolence band) long sleeve and told you that I had the same one, only short sleeve. You couldn’t understand my English words and I couldn’t understand your Japanese words, but we knew what was happening. We were becoming best friends. Haha. And after I sweat through my first of several band tees, I returned from my car with my Beyond Pain shirt. You and your whole crew got more excited than a teenage boy at a public pool.

After the laughter trailed off, you guys made sad faces and directed me toward your merch table and your shirts, where the laughter immediately sky rocketed to the fucking moon. I was so broke and already had bought an ACxDC kawaii hail Satan shirt but couldn’t leave my brothers in the cold. I picked up a twenty dollar Violent Throat FIO shirt. It’s now only two months later and that shirt has already been officially WORN THE FUCK OUT!

That Sunday night won’t soon be forgotten. I didn’t want it to end and was actively trying to find a way to smuggle myself into that jam-packed pass-van. I would have ratchet strapped myself to the roof if a hardware store was open at 3:12 in the morning. Yokohama, Japan, you are all lucky bastards for having birthed such lovely people. Don’t forget how special these musical madmen are. Cherish them as a mid-’90s small child would that a Tamagotchi pet in the midst of being hatched. Yes, they are that precious.