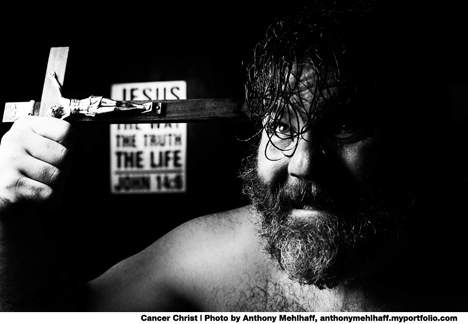 When I think of god, I think of death, destruction, and the power to end worlds.

This photo was taken in my garage during the hottest day of the year. The idea to use the crucifix as a gun seems very American to me. Sweat gathered in a pool at my feet and I fasted for two days before this mid-day photo shoot. I planned on using forms of method acting and abstaining from food and water to encourage anger and aggression. It also made me a bit loopy.

Whether you believe in god or you don’t, sooner or later, you’ll find the fuck out. There is no power as mighty as that of our Lord, god. None as blood–thirsty, brutal but also as merciful, or so I’ve been told. As a little boy forced to attend church, I just thought he was boring as dirt. Being hustled to leave my Sunday morning cartoons and pajamas for a boring, vanilla virgin and a tucked-in shirt was fucked. It was torture.

It wasn’t until that preacher told me about burning in hell—the rapture and all that killing—then I was hooked. As a shithead kid and a constant sinner, I was routinely told how I’d burn in hell. Fire and brimstone. It always sounded rad. Unlike the local preacher, the preachers on TV could fucking sell. They did all sorts of crazy shit to get people to believe in god. I loved when people would catch the Holy Ghost or speak in tongues but their magnum opus was knocking people over with the Holy Spirit! I would watch televangelists knock motherfuckers over like trailer homes during a tornado. Bodies everywhere.

Cancer Christ was born from my hate of every religious person I met throughout my life, most of them being Christians. But also my love for how ridiculous televangelists and their “miracles” were. I was never sold, but was always entertained. That was until I had this crazy experience were I ran out of gas on a dirt road in the desert and ended up walking almost a hundred miles. I was dehydrated, had no phone, was getting dizzy and confused, and started talking to a figure that I recognized to be god. I still to this day don’t know if it was in my head or if I was talking to a desert person, but the conversation sparked my belief in god and my place in his kingdom.

This could be my family history of mental health disorders rearing its ugly head, but this specter was very elaborate and very specific on why I was needed. Brutality—no questions asked—and a place at the table in the kingdom of god. I agreed and years later when asked if I wanted to be in a band, I used this experience as the driving force for the band’s concept. I also added my personal feelings towards religious idiots, the evangelical TV demons who suck them dry, and lots of foul language.

“The Blood of Jesus,” was given wings when I saw a clip of an Ohio women driving away from her church during the height of the Covid 19 pandemic. A reporter asked if she was afraid of getting sick or getting others sick. She replied, “No, I’m covered in Jesus’ blood.” It’s something I will never forget and I knew it had to be Cancer Christ’s first song. All the music is created and recorded by one of the anonymous snake boys, “All Glory Be to God,” and I write the lyrics.

Where to buy the song on vinyl https://www.sweatbandrecords.com/news/neoncorpseparade