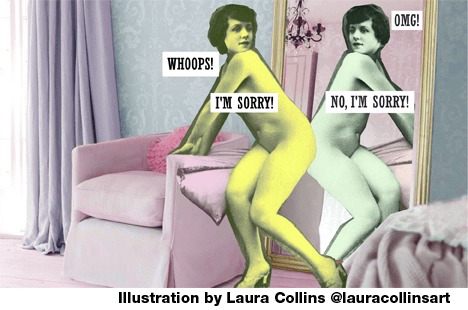 All Apologies by Jamie L. Rotante

If there’s one thing I’m good at, it’s apologizing. Still, there is such a thing as being too good at something. I’d say I’m a little too good at apologizing—so much so, I do it all the time. I’m that kind of awkward who apologizes to inanimate objects if she bumps into them. It’s cute! It’s quirky! It means I feel guilty all the time in my life for absolutely no reason!

And here’s the kicker: I’m not alone. It’s been proven that, on average, women say they’re sorry more times in their lives than men do. According to a 2010 study published in Psychological Science, both men and women apologized 81% of the time when they thought their actions were offensive. However, women reported committing more offenses and also rated their offenses as much more serious than their male counterparts.

It would seem having a proclivity for apologizing is a common trait among women—but why? The study went further to explain men aren’t reluctant to admit wrongdoing, they just have a higher threshold for whey believe warrants reparation. So, even if they apologize, it might not be because they actually believe what they’ve done warrants that apology. It comes down to an important point: sometimes apologies aren’t about what’s right and what’s wrong. They’re about letting go of that feeling of guilt—or trying to stave it off before it begins.

Personally, I think it’s just an attempt at likability. I’d rather you not think I’m an asshole to a point where I’m nearly bending over backwards for your acceptance, than to be blunt and honest and ruin that perception of me. It’s to offset being assertive, the never-ending struggle of not wanting to come off as brash or harsh when I ask for something reasonable. What if my email requiring something that the other person was supposed to do or answer comes off as rude or—and please forgive me for this—bitchy? It’s that constant worry that being a woman will define all of my interactions and reactions. If I’m super apologetic and pepper in enough exclamation points (but not too many exclamation points), I’ll show I’m approachable and kind and not cold and demanding.

But what is it, then, when “I’m sorry” spills out of my lips all the time, to all things? Why is my default mode guilt when I walk into a bookcase or tell someone a piece of information I have absolutely no control over? Does my need for acceptance truly hold no bounds? I believe, at its core, it’s a form of protection. I spend so much time laboring over the choices I’ve made and the conversations I’ve had, recalling every detail and scrutinizing myself each step of the way, a proactive apology before I say too much or care too much feels like a tactic to combat those feelings.

And what of actual remorse, then? If I’m always sorry, am I ever truly apologetic? It seems it could be more of a reflexive statement than a genuine one, but any apology I’ve ever given for a situation that calls for one has been legitimate. Sometimes my pride and my principles can stand in front of the way of reason, but even in that case I find myself often the first to apologize; pride be damned when it comes to moving past an ugly situation and onto greener pastures. But I’ll never say I’m sorry if I don’t truly believe that apology was warranted (though, like 81% of my peers, I do believe all of my “I’m sorries” are necessary), and I’ll never use apologies for manipulative purposes (like saying “I’m sorry you felt this way). I may dole out apologies like they’re growing on trees, but it doesn’t mean I think of them as disposable in any way.

That’s what makes the search for a solution so difficult; if I can find a way to justify all of my apologies, then why would I ever stop? Well, as I’ve mentioned before—I’m a master at rationalizations. And in realizing that I’ve also learned rationalizing something doesn’t mean it’s the right way to proceed. Sure, I can list every excuse in the book for my apologies, but I also recognize that overusing them is a defense mechanism.

So how can I be less sorry? Is it just by changing the phrase “I’m sorry” to something else? When I was in high school, a friend of mine was also a serial apologist. A mutual friend and I made a plan to jokingly say “broccoli” every time she said “I’m sorry” to make her see just how often she was saying it (this was long before I realized I was guilty of the very same crime). I don’t think it worked, in fact I think we just made a joke out of her actual issue (something I still feel guilty about to this day). There are other ways to tackle this issue, though.

For starters, I can stop obsessing over how others view me (easier said than done, of course). Instead of trying to curate a perfect vision of myself, I can recognize how people are often so self-involved they’re not looking for all of the nuances that may make them view me one way or another, or at least not looking for them nearly as much as I’m searching for them within myself. I’ve found this more often than not to be the best tactic. Remembering that most humans are pretty inherently selfish has proven to be an excellent tool for combating anxiety, especially when it comes to social situations or public speaking.

I can also not obsess over people using my gender against me in all interactions; the kind of people who are going to ascribe stereotypes to me because I’m a woman are going to find a way to do that no matter what I say—so screw ’em. Those kind of people don’t deserve the extra time and energy I put into being likeable and inoffensive to all. And, most of all, they don’t deserve my apologies.

And as for saying “I’m sorry” to inanimate objects? Well, I mean, that’s just cute and quirky, and I won’t apologize for that.