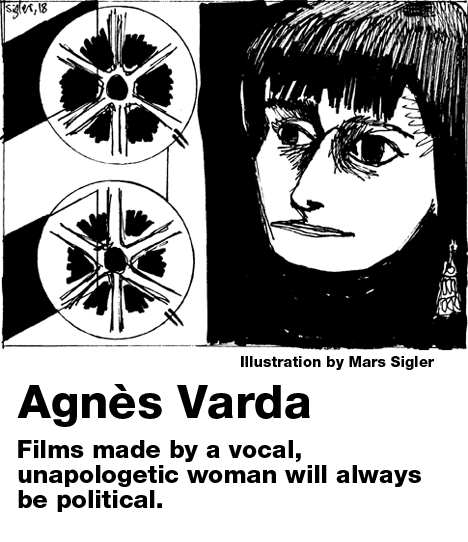 Agnès Varda and Her Inimitable Cinécriture By James Rosario

Her name is often eclipsed by her male contemporaries, but her work can never be. She is nearly peerless in her life as an artist and has never given a fuck about the rules. Agnès Varda made her first film in 1955 and has been sticking it to the man in the most entertaining, artistic, and thoughtful ways ever since. Sometimes she punches you right in the face with her politics and feminism, sometimes she makes you work for it, but always she’ll have you thinking. Some call her “The Grandmother of the French New Wa

ve,” but this title is all wrong. It doesn’t offer the prestige that’s due to her. Agnès Varda is an artist of the highest esteem, and her title should reflect this. Only one other major French New Wave director is still alive and still making films. Fittingly, it is the movement’s most famous: Jean-Luc Goddard.

French New Wave cinema is not easy to define. Beginning (debatably) in 1958 with Claude Chabrol’s Le Beau Serge and continuing through the late 1960s, French New Wave filmmakers strived to subvert contemporary French cinema by kicking down the doors and doing things their way. Their new approach to cinema and its presentation formed two loose groups. The more famous of the two, the Cahiers du Cinéma (featuring Goddard and François Truffaut) consisted of film critics, cinephiles, and essayists eager to transfer their knowledge of film history from the page to the screen. They were film fanatics who worshipped the likes of Welles, Ford, Hawkes, and Hitchcock. The 400 Blows (Truffaut, 1959) and Breathless (Goddard, 1960) took the world by storm, giving credence to this new, young, and offbeat approach to filmmaking. These were movies heavily influenced by Hollywood, but presented through a very “French” lens.

The other group was a bit different. Left Bank Cinema (Rive Gauche) wasn’t obsessed with Hollywood, as their counterparts were. They instead opted to produce films influenced by art, literature, culture, and politics. These filmmakers (Varda, Alain Resnais, Chris Marker, and others) saw themselves as auteurs, the authors of their films. The results were more experimental in style and presentation, and tended to be more ethereal and much more political. Often documentarian in nature, Left Bank filmmakers were less interested in film’s history and more concerned with how movies could be melded with other forms of art to create something wholly new—and all their own—at the same time.

Varda took the Left Bank auteur theory a step further by introducing something she calls cinécriture. cinematic writing. She says, “The cutting, the movement, the points-of-view, the rhythm of filming and editing have been felt and considered in the way a writer chooses the depth of meaning of sentences, the type of words, number of adverbs, paragraphs, asides, chapters which advance the story or break its flow, etc. In writing it’s called style. In the cinema, style is cinécriture.” She does not merely make a film—she creates one from scratch, with every aspect of it carefully considered to convey meaning. A cinécririste such as Varda doesn’t tell stories, but builds worlds which are overflowing with feeling, nuance, and connotation.

An artistic spirit, with nothing but a background in photography, no formal training and very little money, Varda made her first film in 1954, La Pointe Courte. Chabrol’s Le Beau Serge may get the credit for being the first official film in the French New Wave, but it was La Pointe Courte that got the ball rolling. Set in a seaside village in southern France, it tells two stories. First, a young couple discusses and debates the meaning of their relationship in a very French, existential way. Second, locals deal with everyday life such as work, family, and evading the law. In truth, not a lot happens, but the beautiful way in which it’s shot (stark black and white with heavy documentarian overtones) was to become staple of the cinécririste and the French New Wave in general. Without the influence of La Pointe Courte, the movement may have looked very different.

Films made by a vocal, unapologetic woman will always be political. This was true in the 1960s and is true today, but Varda’s feminism and political bite weren’t always overt. In her breakthrough film, Cléo from 5 to 7 (1962), we follow a young woman (Corinne Marchand) through the streets of Paris as she waits for the results of a biopsy. The film’s “real time” and documentary style allow us to witness firsthand Cléo’s transformation from someone who defines herself by what others think of her, to a full-fledged individual, complete with her own set of goals, desires, and personal identity. There are no grand statements or declarations made—only subtle changes in attitude and conversation—but it’s clear that Cléo has grown immensely in a short amount of time. Regardless of what others may or may not continue to see her as, she’s become human in her own eyes, and that’s what matters.

Varda carries this notion of identity into many of her films. In Le Bonheur (1965), two women are wrapped up in one man’s notion of happiness. Exactly what happens by the lake near the film’s end is up for debate, but Varda’s critique of male faithfulness and selfishness is clear. To men, women are easily replaceable, if not disposable.

This idea is perhaps bookended in Vagabond (1985), where we are introduced to a dead woman in a ditch. Through a series of short vignettes and encounters from the weeks before the discovery, we piece together what we can of the life of this invisible girl (played brilliantly by Sandrine Bonnaire). As it turns out, she wasn’t invisible at all. Hitchhiking alone across France, she manages to touch the lives of people in ways she never knew. She was unwilling to see that people cared for her, and that she had an identity outside of her outward appearance and lifestyle.

In contrast to Varda’s sometimes veiled political and social critiques of her narrative works were her documentaries. These films, such as 1968’s Black Panthers, 1975’s Women Reply (only eight minutes long, but powerful as hell), and 2000’s The Gleaners and I don’t mince words. Her political stances are made clear, and, as always, presented in Varda’s unique style. She often breaks from film norms to offer asides and stream of consciousness style observations. She becomes a participant in her films in addition to her role as cinécririste. With no formal film training, and no one to answer to but her own creativity, who’s to stop her? These breaks from the “rules” create a warmth and personality absent in most linear documentaries.

All of Varda’s films are politically, socially, and culturally aware, but perhaps her most personally reflective are The Beaches of Agnès (2008) and Faces Places (2017). Her sixty-plus years as a filmmaker culminate into these two wonderful documentaries, with her flare for the dramatic, pragmatism, and adventurous spirit on full display. She has a knack for finding truth and beauty in the most random of hiding spots. In Faces Places, she travels around France with artist JR, photographing everyday people, then plastering the images as huge murals on the sides of buildings. The feeling and emotion they produce from their subjects is downright heartwarming—and who couldn’t use a bit of that from time to time? The Beaches of Agnès chronicles her long career in her own words, and, of course, her own distinctive style. She often stops to ponder mirrors, cats, architecture, and memories in a way that’s introspective and engaging.

Her interest in the poor and working folks of France is a driving force in her work. She says, “There is something so touching in normal people. They really have a beauty. I feel that they need light. They need to be seen. They need to be listened to.” An advocate for the marginalized until the very end, she adds “I don’t feel like filming people that have power. I’m much more interested in the rebels, the people who fight for their own life.” The title “Grandmother of the French New Wave” suggests a woman who sits in a rocking chair—a woman whose best years are behind her. It won’t do. Agnès Varda has outlived the film movement that made its men famous—and then outlived most of the men. Her contributions to the art of film are immeasurable, and everyone needs to know her name. Long live the incomparable Agnès Varda.