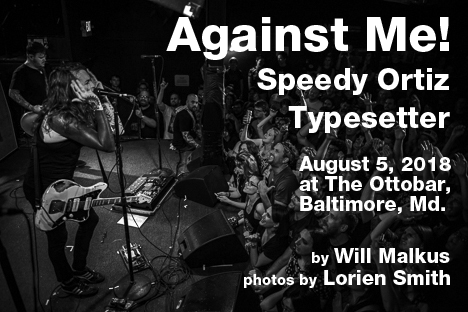 Against Me!, Speedy Ortiz, and Typesetter By Will Malkus

Against Me!, Speedy Ortiz, and Typesetter, August 5, 2018 at The Ottobar, Baltimore, Md. By Will Malkus

I’ve seen Against Me! live more than once, so when I walked into the Ottobar in Baltimore, Md. the same way I have hundreds of times before, I thought I knew what to expect. The sweaty, heaving mass of punks both young and old, wide smiles as far as the eye can see, and of course Laura Jane Grace’s trademark scream-singing shaking me down to my bones, but this particular AM! show was a stand out among stand outs.

There are a lot of factors that can take a show from just being rad to crowning the top five, like maybe the lineup has incredible openers (it did), or maybe there’s an abundance of that special energy of an entire community all moving as one (there was). Maybe it’s as simple as seeing a band you’ve loved for years playing in your hometown venue, combining something special and impermanent with a place that’s familiar and comfortable. That combination alone can take a great night and push it that extra bit so that it reaches extraordinary. This was that kind of night.

The first thing I did after entering was grab a beer and head up to the upper level to catch up with  Lorien Lamarr (Aretesophist Photography) and other friends, but once the first band took the stage and started sound-checking I quickly descended back into the crowd. What struck me in the weeks leading up to this particular show was the lack of a local opener—a pretty uncommon sight in a city like Baltimore with a thriving punk scene. Whether it was a specific tour-wide decision or the bands’ commitment to getting the crowd home at a reasonable hour on a Sunday night, it struck me as odd that they didn’t want a local act to warm up the crowd first.

As soon as Typesetter from Chicago, Ill. launched into their set, however, I immediately understood that this was a band that required no warm up. The five-piece’s sound is a fantastic balance of No Idea Records whoa-oh harmonies and ’90s grunge which occasionally wanders into melancholic indie pop territory. Typesetter had people moving by the second song, and by their fourth the crowd realized they were most certainly not watching an opener and really got into it.

One of the themes of the night was hard work, as three out of the five members of Typesetter pulled double duty on vocals as well as their instruments. The only exceptions were Matt Gonzalez on drums, who was working hard enough for two kits, and Sarah Bogosh who stole the show by keeping up on keyboard, trumpet, vocals, and effects pedals simultaneously. They even gave a heartfelt tribute to Baltimore’s own deceased Charm City Art Space, may it rest in peace.

As Typesetter wrapped up their set and we all made a mass exodus back to the bar I overheard the people around me confirming my suspicions that they had indeed been blown away. It would be a tough act to follow, but I knew Speedy Ortiz was more than up to the challenge. This was my first time seeing the self-described “snack rock” band from Philly after years of hearing how good they are, and they did not disappoint. I was especially excited to see that Audrey Zee Whitesides had joined on bass. I had last seen her on tour with Mal Blum a few years ago and I knew from experience that she could slap with the best of them, but she pulled out all the stops and still managed to blow me away with the bassline on “Swell Content.”

The name Speedy Ortiz might be kind of an in-joke, because this band loves to play around with speed. Songs regularly start out at a breakneck pace only to slow down to a sludgy crawl by the second verse, then speed back up again to close it out. Speedy Ortiz put out their first release in 2011 and have produced at least one new album every year since, so it was hard for me to keep up with their set list, but some stand-out performances were “Lean in When I Suffer” and set closer “No Below,” which frontperson Sadie Dupuis playfully introduced as originally being titled “Ocean Shitty” after Ocean City, Md.

If you’ve seen Speedy Ortiz live before you’ve probably also seen the flyers that they put up at each venue before their show, detailing what constitutes safe conduct in a show space and offering a phone number and email address that goes directly to every member of the band and the tour manager. Dupuis paused in the middle of the set to call attention to these resources, adding that Against Me! was the first tour headliner to insist that they be added to the contact list. She then announced that she had forgotten to tune during her crowd work and launched into “I’m Blessed” (a haunting anti-abuse song off of their most recent album), proving that her beautiful, breathy singing is no less powerful or angry than the band Speedy Ortiz was opening for.

I snapped a picture of one of the safe space flyers in the bathroom while I was waiting for the bar to clear and basked in the excitement of my fellow punks. The air was full of that nervous energy that permeates in those last calm moments before the headliner takes the stage, the unspoken agreement that everyone is about to go fucking nuts. Halfway through my third and final beer of the night I decided I would start watching Against Me!’s set from the upper level, which ended up being a great decision as I was less than twenty feet away from the band with a perfect view of the stage.

The last time I saw them play was at the Fest in Gainesville, Fla. from across a packed Bo Diddley Plaza and it had been hard to see the stage from the depths of the pit, so this time I got to observe all kinds of small moments between the band, like when Laura Jane Grace looked at bassist Andrew Seward and mouthed that she was feeling so good, with a huge smile on her face that got wider and wider as the night went on. There’s a spark that lets you still love doing this, in spite of everything, decades after you started. Not everyone has it. Laura Jane Grace fucking has it.

Against Me! is notorious for switching up their setlist from night to night, which is even more incredible given that they played twenty-four straight songs and only paused once just long enough for Laura Jane Grace to say, “It’s so nice to see you!” The first quarter of the set was fairly tame while the crowd got into sync, but by the time the band started playing “Thrash Unreal” everything exploded. From where I was standing I couldn’t even see the floor, just a mad rush of bodies all pressing towards the stage, hands thrown up into fists, and hundreds of faces all screaming the words back as loud as they could. The band was so incredibly in sync that they barely had to look at each other to know where they should be or what song was next; they just burned their way down the setlist and we all went along for the ride.

“I Was a Teenage Anarchist” seemed to ring especially true to this crowd with its repeated chorus asking if we remembered when we were young and wanted to set the world on fire, and I can only speak for myself and the people I came with but yes, we absolutely did. Against Me! closed with a double whammy of “True Trans Soul Rebel” and “Black Me Out,” two more recent songs that were treated with a lot of respect and reverence by all in attendance. This band, which informed an entire generation of punks, now screams at audiences about being queer and trans and each night hundreds of people scream it right back. It’s so fucking good.

After repeated chants for an encore Laura Jane Grace did reemerge with an acoustic guitar to serenade us with a beautiful and unexpected cover of the Mountain Goats’ “The Best Ever Death Metal Band in Denton” followed by the full band for a finale finish of “Tonight We’re Gonna Give it 35%,” “Reinventing Axl Rose,” and “We Laugh at Danger (And Break All the Rules),” but I had to look that up because by that point I couldn’t hold out any longer and jumped into the mass of sweat-soaked bodies to become a part of the chaos.

Will Malkus is a writer, librarian, and concert photographer based out of Baltimore, MD. You can check out his photography portfolio at charmcorephoto.com.