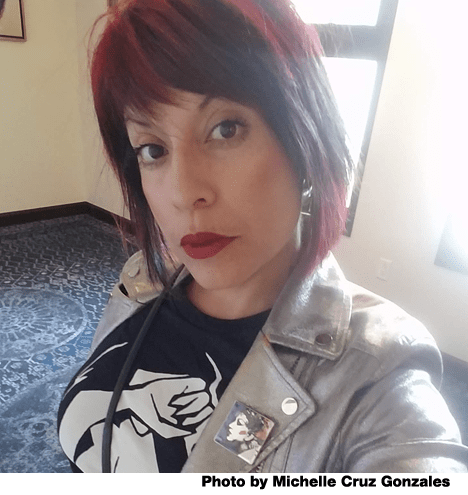 I silenced a room twenty-seven years ago while in Spitboy with the declaration, “We’re not a riot grrrl band,” in front of members of Bikini Kill. Still, I have always liked Bikini Kill’s music and what they stand for. Why wouldn’t I? Perhaps I learned the answer May 2, on their final Los Angeles reunion show at the Hollywood Palladium, where I spent most of their set standing outside on the upper patio wishing I still smoked cigarettes. At least I could breathe out there away from the hot lights, the hype, the crowd, and my eighty-dollar place to stand on the balcony with my friends where I couldn’t enjoy a single song even though I wanted to.

I was in the L.A. area to give a talk at UC Riverside’s first-ever conference on punk that same week. I figured more punk wouldn’t hurt. But it did. Confusing and painful feelings, new and familiar, washed over me—annoyance, sadness, anger, envy—feelings that took hold and I couldn’t shake.

On the way to the show, I got a text from a friend who forwarded a post from the band Fuck U Pay Us. They had opened for Bikini Kill the night before and wrote about what sounded like a terrible experience: transphobic treatment by the security at the Palladium. This treatment was not directly Bikini Kill’s fault, but they did not make a public statement against such treatment either. A few nights before, still home in Oakland and thinking about punk matriarch Alice Bag opening for them, I dismissed my annoyance choosing to follow the logic in the unfortunate reality headlining a show at a venue like the Palladium: ticket sales and draw. I can see how Bikini Kill asking women of color, teenagers, and a Latina sexagenarian was a genuine attempt at using their privilege to amplify acts that could benefit from such amplification, but was choosing not to make a statement about the treatment of Fuck U Pay Us a pattern? Then there was my own pattern of critiquing them. Maybe reunion shows are just a trap. Maybe they are a case of damned if you do, damned if you don’t.


I’ve had the same recurring dream for several years.

Spitboy has decided to reform. We have just a few days before our first reunion show and for some reason, or for many, we haven’t practiced. I realize I don’t remember how to play any of the songs.

In the most recent version of the dream, Spitboy is about to fly overseas. Wracked by complete panic, I scramble to figure out what to do, and then I feel a sudden rush of relief when I wake up in the dark.


Out on the balcony at the Bikini Kill Palladium show, I looked out at the row of lights that rim the perimeter and the people milling about. I wondered why so many others were outside and if my friends had noticed I was gone.

I paced around in my Spitboy T-shirt trying to figure out why I felt like I was crawling out of my skin.

Maybe it was all the riot grrrls, all the adoration, all the photos by just about everyone I know in the Bay Area who drove to L.A. to attend one or all of the shows, all the long, dramatic Facebook posts about what they meant to them while growing up. Maybe it was that being in a band that was not a riot grrrl band in the 1990s always means the risk of being forgotten. Maybe it was everyone around me singing every word to every song. Maybe I was jealous Tobi Vail got to play drums (I’m always jealous of other drummers). Maybe I still disliked how Kathleen trots around on stage like a cheerleader. Maybe I was just being petty, but I really had expected to have a good time.


In 2016, I joined Kamala And The Karnivores for what turned out to be a series of reunion shows. We were asked to reform and play a Lookout Records band reunion show at 924 Gilman in Berkeley. Having been a relatively short-lived band, and a precursor to riot grrrl in sound and sentiment, we decided to play the show for many of the reasons other bands reform, with some important exceptions: We knew we would make no money and our music wasn’t about to be launched on streaming services. In the end, because it took so much time to relearn the songs, we decided to play several shows. Then I convinced the band to record all the Karnivores songs that we never recorded in an effort to preserve our place in punk herstory. I wanted to document the work, but we were never going to write new songs, or continue on for very long, and we knew that.

In a Pitchfork interview with Erika Dawn Lyle, the guitarist who replaced Billy Karren for the tour, spoke eloquently about reasons she joined the band to do the tour, citing many of the same reasons Kamala And The Karnivores chose to reform, noting this “tremendously misogynist moment in America,” and their ages. “I also think there’s a lot of societal pressure for middle-aged women to simply disappear,” said Lyle. “It’s powerful for Bikini Kill to come back as older women …” The Karnivores felt similarly. Why should all the Lookout dude bands reform and not us? Middle-aged women who stopped playing music to go to school, have children, and a career can learn to play their instruments again, memorize the songs, and wear dog collars on stage, too.

There were other reasons the Karnivores decided to reform, the most important: We missed each other and we loved playing our songs—“Love Like Murder,” “Tiny Steps,” “Back to Bodie,” “Disappear”—love songs that only feminists could write and songs about sisterhood.

I sat down on a bench on the Palladium patio. I could actually enjoy the music a bit from there, too, and I needed to sort through my feelings in order to make sense of the fact I was having a terrible time at a show I had paid a lot of money for and elected to attend. To help understand what made me buy the tickets, I made a list:

b) I was going to be in town anyway

c) Women should support other women

d) I didn’t want to be a poor sport

d) Fear of missing out

That last one that really got me. What I wouldn’t have given at that moment to have turned back time and simply stayed in the hotel where I had rented a room with my mom (who was with me for the conference), where we could have had a drink and a good laugh in the city of our births by the coffin-shaped pool.

While the term FOMO is relatively new, the feeling is not.


Before Bikini Kill’s set, I watched Alice Bag perform with Les Butcherettes, another moment when I questioned the wisdom of reunion shows. As I watched Alice plant her feet on the stage next to Teri Gender Bender and belt out her line of the song, I thought again about how she had opened for Bikini Kill there just a couple of nights before. While it’s important to add Alice has told me she did not feel tokenized by Bikini Kill and that she was happy to play the show, it just didn’t seem fair Alice opens for anyone. It makes sense, though, given her recent collaborations with Kathleen Hanna. It also makes sense since Alice continues to release new music, to write new songs—some of the best songs that she’s ever written—yet she never headlines the size of venue or audience that her import in punk herstory deserves. An opportunity to play the Palladium with Bikini Kill or Jawbreaker gives her the chance to do that. Alice, who truly is a first-wave punk legend, who made music alongside bands like The Germs, The Zeros, The Go-Go’s, Joan Jett at the same time as Poly Styrene and X-Ray Spex, The Clash, and The Slits.

Maybe I found the place where my punk anti-authoritarianism, buck-the-rules values clash with my Mexicanisma and my respect for my elders, even my punk elders.

Maybe other people feel this way too.

It’s true Alice Bag paved the way for my first bands Bitch Fight and Kamala And The Karnivores.

But it’s also true she is both a legend and a contemporary, an artist in her own right, who is once again by virtue of existing, a queer, Chicana punk, and making the best music of her life in her sixties and forcing us to reexamine our punk values and ethics.

But regarding the rest of us, I still have to ask. Can reunion shows ever be anything but a trap? Maybe my recurring dream where Spitboy is about to play and I realize I don’t know any of the songs is a warning to remember that while a Spitboy reunion might be expected, there are all sorts of reasons why it wouldn’t work and why it scares me in the first place. Of course, Spitboy could never draw a Bikini Kill-sized crowd or ever be booked at a venue like the Palladium, but even if we played a couple of nights at 924 Gilman, is it possible to reunite for the right reasons when money, ego, and “likes” are involved? It’s obviously a rhetorical question, but if you’re going to do it at least consider the following:

• Is nostalgia enough of a reason to reform?

• Consider the very real issue of ageism that impacts women in music, as Bikini Kill has done

• When involving living legends, have careful conversations about how that can be done as thoughtfully as possible

• And as Bikini Kill did, do elevate younger, not as well-known acts

• Younger, not as well-known acts of color could really benefit

• Consider acts who you know are fans of your work

• If you’re all white, maybe elevate non-white acts, but do not tokenize.

• If you include trans or non-binary folks, ensure a safe space


If you’re wondering if Kamala And The Karnivores is still a band, the answer is yes. We have decided to never, officially, break up, but to just be four women who go out to dinner together instead.

And if you have to ask, will Spitboy ever reform to play music? No, probably not.