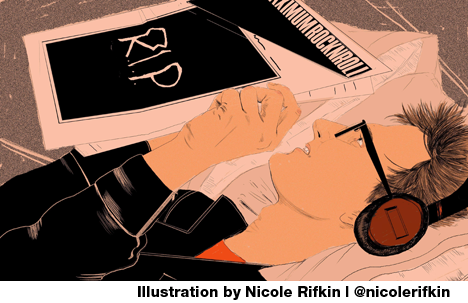 I never contributed or volunteered for Maximum Rock’n’roll. I read the zine for only a fraction of the time it was being published, but those few years I was a regular reader changed my life. That sounds a little hokey to say in 2019, but hey, it’s the honest truth. For all the times I said punk rock saved my life, that included MRR.

Its founder Tim Yohannan died a few years before I became a reader, and His use of MRR as a cudgel against those who didn’t fit his leftist vision never bothered me. After all, I wasn’t around to be one of his targets.

In spite of that, MRR offered a home to radical ideas that I don’t want to take for granted. When people co-opt anarchist imagery, turn around it and sell it back to you, and then upsell you with VIP packages and special accommodations for the privileged, it can be easy to lose sight of what’s genuine. Reading MRR felt like a respite from all that bullshit—the disingenuous and unsavory corporate channels mass producing sanitized rebellion into indoor/outdoor shopping mall consumption.

As the sun sets on the print zine, I want to look passed the personal attacks and vendettas. I want to remember the Maximum Rock’n’roll that mattered. All the work that Tim Yo, the volunteers, the writers, the editors, everyone that contributed: It made a difference. And for this once angry teenage kid who grew up feeling isolated in the South Florida suburbs, MRR offered a window into something greater.


I first heard about Maximum Rock’n’roll through the Epitaph Records mail order catalogue in 1996. The catalogue came with Rancid’s And out Come the Wolves, and Epitaph used reviews from both MRR and Flipside to hype their albums.

When I was eleven years old, that catalogue gave me my first blueprint into punk. I was determined to find those zines and devour as much of it as I could latch my hormonal preteen hands on. Only, I had a problem: I couldn’t find MRR or Flipside anywhere in the South Florida suburbs.

I scoured CD bins in major chain stores for anything from Epitaph and Lookout! or anything punk-adjacent, but copies of MRR and Flipside eluded me. I checked all the major bookstore chains, and I asked the owner of a local newsstand if he could order MRR and Flipside for me, but he couldn’t find them. Even though I had a home PC, a lightning fast 28.8 kbps dialup connection, and lurked the alt.punk usenet group, I don’t remember being able to find homepages for either MRR and Flipside. After all, I wasn’t totally confident what to look for, and I was beginning to wonder if they were even real.

Searching for them continued to be a mild obsession until I found a copy of MRR five years later in 2001 at an independent bookstore in Durham, N.C., and again a few months later at Blue Note Records in North Miami, Fla., which was much closer to home. For a short while, Borders started carrying them too, but that experiment didn’t last long.

Maximum Rock’n’roll gave me the education I didn’t know I needed—a slow broil in punk ethos and social consciousness.

Between international news reports of governments trampling on human rights, first-hand accounts of protests, and scene reports from places in the world where punk rock is pretty much forbidden, MRR made a clear argument for why DIY platforms are needed. We can decide what we want to cover, and we deserve to hear from independent voices without being colored by ulterior motives to control narratives and accumulate wealth.

And not just ethics, but MRR helped me check my own humanity and taught me the importance of inclusivity, which was no small feat. Until I read MRR, I was never exposed to anything that explicitly wanted to celebrate the LGBTQIA community.

MRR ran a classified ad for months asking for contributors to help with an LGBTQIA issue. Even though I never saw that issue,  the act itself radically changed my perspective. Growing up in my household, my dad would frequently call anything he disapproved of gay, call me a faggot for dressing punk, and would tell me he would kill himself if his kids turned out gay. Seeing that ad shocked me, and forced me to confront bigoted beliefs that were ingrained in my upbringing.

Most of all, I loved the columns, but turning to George Tabb’s twisted column, “Take My Life Please,” came first every time I got a new issue.

George’s engaging storytelling pulled me in, and he quickly became the first actual human adult I identified with (versus someone like Spider-Man). We had some superficial similarities: We were both Ramones-loving, biker jacket-wearing, University of Florida-attending, Jewish semi-Floridians who came from affluent backgrounds.

But George wrote often about growing up with an abusive father, which was the first time I was exposed to someone talking about domestic abuse. Reading about someone else’s struggles changed how I viewed my own troubled relationship with my father; even if I didn’t know at the time what I was experiencing was classic abuse. My father emotionally manipulated me into staying silent, making me terrified to speak up, and George’s stories about how he stood up for himself in the face of constant beatings gave me real courage.

I have this one distinct memory of shutting down my dad’s abuse after he tried to put me down for dressing punk (and for just expressing my independence). I was coming home after a day of record hunting with friends. As I walked in the door, my dad was sitting in his living room chair. He put his book down, turned to me, and said, “You look like a faggot.”

My dad cringed hard, shaking his head back and forth. He started begging me, “Stop… stop…”

Without George’s column, I would never have had the courage to stand up to him before then. That shit was life changing. Not only did my dad never throw that slur at me again, but I learned the world didn’t end because I stood up and fought for myself.

Of course, George’s column wasn’t the only one I loved. I would pore over Mykel Board’s column, studying his writing style. I would also look forward to staples like Felix Havoc and Bill Florio.

I wasn’t always sure I agreed with the CrimethInc. (or their zines outside MRR), and Lefty Hooligan’s communist treatises felt like reading grad-school level dissertations well beyond my reading level, but I was still fascinated by them anyway.

After high school, I found myself prioritizing reading MRR less. I got busy starting bands of my own and sometimes attending class at the University of Florida. My media diet changed, too. Punknews.org became a daily staple, and I started picking up zines less often. After all, when you’re busy writing six thousand word essays on a PC, it’s easy to get a news fix from a website than an intimidating hundred page tome of newsprint. Plus, I learned through message boards that all my favorite MRR columnists soon left.

I didn’t realize it immediately, but I had been missing a voice that championed independent channels, minority representation, and international human rights under oppressive regimes.

Even though Maximum Rock’n’roll the print zine is coming to a close, I’m still grateful it’ll be around in some form.

I hope the end of the MRR print zine acts as a wakeup call. If we want to keep our platforms that allow us to talk to each other independent of Mountain Dew ads and profit-seeking shareholders, we have to support them. We can’t get complacent and take for granted that a treasured staple of DIY punk will stick around forever.