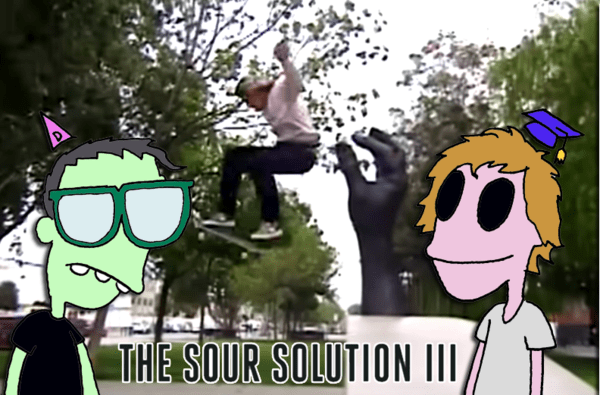 Rick: Hi Razorcake readers, I really like skateboarding, but also don’t know shit about it. I’m sure I’m not the only casual skateboarding fan out there and thought it would be fun to review some recent skate videos. But since I only know the names of four or five tricks and do not have the fingers on the pulse of the skate-scene, it’s probably a bad idea. I’m all about executing bad ideas and thought I would attempt it anyway. I know that actual skateboarders will eventually run across one of these reviews and slander me on my dumbness. That’s why I recruited the help of human skateboard encyclopedia, Evan Spradling.

Evan: Sour is a skateboard brand based in Barcelona, Spain. Most of their team is originally from Sweden, so a lot of the footage in this video was filmed in parts of Sweden and Spain. In the skate world, Europe is looked at as this fantabulous wonderland filled with amazing street spots around every corner, with Barcelona being the ultimate skateboarding destination. You can expect almost any European skate video to include wizard-level skating at incredible skate spots, but Sour videos are in a league of their own. They seem to have mastered the special blend of creative skating, filming, editing, and song selection that makes a perfect skate video.

Rick: Evan was so stoked about this video that he bought a Sour Solution III hoodie before it was even out. So, if you got this far in the review, know it’s going to be very biased. I’m sure you’ll find a way to deal.

Evan: What can I say? This video is just that good.

Rick: The video doesn’t give you very much of an intro and goes straight into Vincent Huhta’s part. The first thing to be stoked on is that Huhta skates to a ska song (Skanstull, “Flaskan”), and it’s actually pretty good. The lad rolls fakey a lot, rolls through some grass, and we get to see a whole eight seconds of vert skating. This clip introduces the viewer to a secondary character to the video: a long, curvy bench.

Evan: Vincent Huhta’s part is so fun to watch! The ska song rules! Huhta’s style is so loosey-goosey, and every trick he lands looks like he’s hardly trying but barely getting away with it at the same time. One thing you always see in Sour videos is people skating spots most people never even think of skating. Huhta is no stranger to weird and wacky spots. In one clip, he rolls through what appears to be an eight-inch-wide gap between two walls. His video parts always give off the same vibe as Mark Gonzales in Video Days (a video part I hope Rick has watched before), and if that isn’t high praise then I don’t know what is.

Rick: Martin Sandberg skates to some sleepy song (Moonica Mac, “Just Idag Är Jag Stark”). I will never get when people skate to slow, moody songs. He does some rotating air trick and we see our pal the curvy bench again.

Evan: This is probably my least favorite part in the video. It’s still amazing, but I agree with Rick on the song. I think slow and moody songs can fit with certain peoples’ skating, but Martin Sandberg’s uber tech, ledge-heavy section probably would’ve stood out more to me if it had been edited to a hip-hop track. His backside nosegrind on the long, curvy bench that Rick keeps mentioning is probably the best backside nosegrind ever done, so there’s that.

Rick: Next there are some clips from a bunch of people. Jonas Skrøder does this trick off the steps and touches a wall. It almost seems like a camera trick. There is some good ditch skating in here too.

Evan: For me, this montage is all about Oscar Candon. I love the clip where Candon ollies a street gap, lands with his feet in nollie position, and immediately bonks a nollie flip off of the bricks.

Rick: In Axel Berggren’s part, he skates on some bricks (Evan’s favorite noise) and does some crazy shit off of a billboard.

Evan: This was the first time I had heard of Axel Berggren, and my main takeaway is that his skating is aggressive! This dude skates like he’s in a fight with the streets or something. The billboard wallride is super sick. His face at the end of his part makes me laugh every time. I’m looking forward to future footage of this guy.

Rick: Tom Snape rolls down some marble and sent shivers down my cowardly spine. Snape skates some of the gnarliest shit in this part, including that bench. That curvy bench is small potatoes to the two benches he kickflips from one to the other.

Evan: Snape’s part is perfect. He stomps the absolute shit out of every trick he does, and the song (Capleton featuring Method Man, “Wings of the Morning”) fits his skating perfectly. The kickflip Rick mentioned is actually a switch heelflip. I’ve seen that spot with my own eyes and can confirm that it is extraordinarily large potatoes.

Rick: Barney Page skates to the Public Image Ltd song “The Order of Death” and it works for him. The dude pops across a playground, skates on glass (glass!), grinds a dumpster, and does something where he transfers from a wall to a brick rail. I’m sure Evan will make that sound more exciting.

Evan: Barney Page has a standout part in this video, and I think a big reason why is that the song works so well with his skating. I actually almost used this song in a skate video I made a few years ago, and now I’m kicking myself for not using it. One thing I love in video parts is when the skater does two tricks at the same spot that mirror each other. Page does this with a backside and a frontside noseslide 270 on the back of a curved bench (not that curved bench) into a little bank. You can tell from the clothes he’s wearing that he did them both in the same session too, which is sick. His last trick, a backside noseslide popout over some stairs onto a narrow brick hubba, is probably the gnarliest thing in the whole video. Tom Snape and Barney Page’s back-to-back parts are where this video really picks up steam.

Evan: Josef Scott Jatta’s part is short, but it is sweet. He skates faster than everyone else in the video and does some seriously gnarly tricks. The backside 180 over the long grate where he lands between those two posts really sticks out as something only a fool would try. I love this part!

Rick: Albert Nyberg does some madness between two electrical boxes. Nyberg’s feet are rarely on the board and it’s mind boggling.

Evan: There are certain skaters who have a problem where they box themselves in as someone who only does “circus tricks.” Richie Jackson comes to mind. He dresses like a pirate and does nothing but hippy jump, powerslide, and one-wheeled manual variations. It’s technically impressive, but kind of gross and gimmicky at the same time. Albert Nyberg is like the ultimate “circus trick” skater. He does cab flip hippy jumps and sideways casper slides, but he also does hardflip front blunts and fakie flip crooks. And he makes it all look good. Can’t hate on this guy.

Rick: Nisse Ingemarsson does this amazing pop off a statue of a hand. And does a lot of playground skating. I was pretty astounded by the tricks off two springy pads at the playground. And why didn’t my playgrounds ever have those?

Evan: This is my favorite part in the video. Nisse Ingemarsson is an adult who does skateboard tricks on playground equipment for a living, and somehow looks like the coolest person on the planet while doing it.

Rick: Gustav Tønneson looks far too carefree to be doing these tricks. It could just be the manbun giving him an easy-going look. He bolts over several patches of grass and vegetation, rolls up a questionable wall, and outshines Ingermarsson with the playground springy pads. All to a haunting saxophone and theremin sounds of Hank Levine And The Blazers, “Midnight.”

I believe Gustav Tønneson sold his soul for a lifetime supply of magic pixie dust that gives one the ability to skate like the human embodiment of a magic carpet.

Evan: I believe Gustav Tønneson sold his soul for a lifetime supply of magic pixie dust that gives one the ability to skate like the human embodiment of a magic carpet. He is one of the greatest skateboarders of all time, and he’s also the person responsible for filming and editing most of the Sour videos, including this one.

Rick: Appearing from a sewer is Simon Isaksson. The dude rips on water, dirt, grass, tile, loose pipes, and even a trampoline. It seems he will skate the gnarliest textures, including an extremely steep brick-slatted wall. They definitely did save all the most insane shit for last.

Evan: Simon Isaksson has the most creative mind in skateboarding. He lives in a city where there’s a plaza around almost every corner with perfect ledges, banks, stairs, and rails. Yet he chooses to skate things like tree roots, fountains full of water, and spots that have been purposefully skate-stopped. You get a little of this eye for skate spots with the rest of the Sour crew, but with Isaksson, every clip is something that ninety-nine percent of skateboarders would never even consider trying. On my first time watching this video, I laughed the entire way through his part. It’s impressive, it’s comedic, and most importantly, it makes me want to go street skating.

Rick: It is a top tier video. I’ve heard some folks say that any skate video over twenty minutes is too long. All thirty six minutes of Sour Solution III fly by in a flash. Supposedly, I’m underestimating how popular Sour Solution is. I’ve never seen a single ad or piece of merch for this crew other than Evan’s hoodie. So I assume they aren’t up there with the big companies. They deserve more hype. This video is something you show to your non-skateboarding friends to get stoked. And good luck not humming that Hank Levine tune for the rest of the day.

Evan: Since this video came out five months ago, I’ve probably watched it thirty times. It’s rare for me to obsess over a skate video in the same way I did when I first got into skateboarding around twenty years ago, but Sour videos never fail to bring out the thirteen-year-old skate nerd in me. Rick warned you that my review would be biased. The Sour Solution III is a skate video that makes me want to rally some friends, find some weird skate spots, and have some fun! Now go watch it!