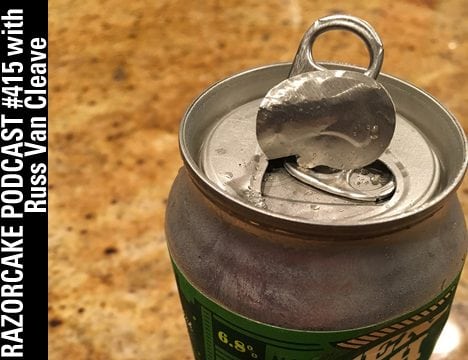 Things have been hectic. The things that one might expect (and most hope) to go well have been fine. Everything else feels like a tumultuous roller coaster—at once, good, bad, and ugly. As such, it’s been some time since I’ve been able to get one of these together. Per the usual, there is no specific agenda or theme although I did feel inclined to include a set of African music after reading Kevin Dunn’s excellent article on African politics in Razorcake #92. If you’re one of those squeamish listeners who finds such things too far outside of your comfort zone, then hopefully you can find some other good spins among the old, new, and obscure tracks that are posted herein.

Tracklisting:
Dead Bars, “Just Fine” from Dead Bars/Sunshine State (No Idea)
- - -
Treepeople, “Funnelhead” from Something Vicious for Tomorrow (C/Z)
Big Drill Car, “Friend of Mine” from No Worse for the Wear (Car Go)
Seaweed, “Against the Sky” from Actions and Indications (Murge)
- - -
C.A. Balogun & His Abalabi Group, “Egan Mi Ko Ye O” from Ju Ju Roots: 1930’s-1950’s(Round...Errrr)
Jingo, “Fever” from Afro-Rock: Volume 1(Evolver)
Ify Jerry Krusade, “Everybody Likes Something Good” from Nigeria70: Lagos Jump (Strut)
- - -
Wet Nurse, “So It Goes” from So It Goes(Recess)
Roxy Music, “Just Another High” from Siren(I Land)
Clock Hands Struggle, “New York” Distaccati(Chocolate Lab)
- - -
Fleshies, “Onion of My Eye” from Brown Flag (Recess)
Drag The River, “Brookfield” from You Can’t Live This Way (Suburban Home)
Treasure Fleet, “The Wolf” from The Sun Machine (Recess)
- - -
John Doe and The Old 97’s, “ Crying But My Tears Are Far Away “ from Poor Little Knitter On The Road (Blood Schott)

Treepeople: Treepeople was the band that Doug Martsch was in before Built To Spill came around. This album (creepy cover art and all) is the only full-length Treepeople album I’ve really listened to repeatedly, but other things I’ve heard by them are also enjoyable. This song is probably my favorite cut from this record.

Big Drill Car: There have been times in my life when BDC has nearly completely dominated my listening agenda so it came as quite a shock to me that I have yet to play something from this classic ‘90s L.A. outfit on my podcasts. I decided to rectify this issue by playing my favorite song from their final record.

Seaweed: I figure since we’re getting all nineties up in here, why not play some Seaweed? This cut is from their stellar 1998 release, Actions and Indications.

C.A. Balogun & His Abalabi Group: Since Razorcake issue #92 features a pretty bitchin’ article on African politics (and also makes mention of some of music from the continent), I decided to capitalize on this opportunity and play a short set of African music on this podcast. This first song is a song recorded in the late 1950s by a Yoruban group from Lagos in Nigeria. Nigeria, having been a colony of Britain since 1800, had access to recorded music from around the world early in the twentieth century. The intermingling of different musical styles with traditional Yoruban music led to what was called “palmwine” music or “juju” music, with the first recordings emerging in the 1930s. This music eventually evolved into “high life” music. All of these styles were integrated into “Afro Pop” music in the seventies that was subsequently popularized by artists like King Sunny Ade and Fela Kuti.

Ishmael Jingo: James Brown toured Africa in 1966 and both his music and message resonated strongly with post-colonial Africa. The “Afro-funk” movement was undoubtedly influenced by James Brown and his music. Ishmael Jingo supposedly recorded this song with his band in the garage of his house in Mombasa, Kenya in the early 1970s. If you think you’ve heard it before, it’s because you probably did when you watched the movie The Last King of Scotland.

Ify Jerry Krusade: This is a cut from a Lagos musician that features more of a rock influence. Ify Jerry had been a musician in an afro-rock band called The Hykkers that played for soldiers during the Biafran War. When the band broke up, Ify Jerry recorded this single. In general, the history of all of this music is not only very murky and obscure, but also very complex. Hopefully, these three cuts give you an idea of what’s out there.

Wet Nurse: I saw Orlando’s Wet Nurse a few years ago here in Tampa and they were fantastic. I really enjoyed the six-song EP I picked up that night. It was rough-around-the-edges in the way that lots of bands earlier recordings can often be, but there are some great, well-written songs on it. So, naturally, I was pretty stoked when I saw that Recess was going to release an LP by them and have finally gotten around to ordering one from Todd. This is the self-titled, first track from what I deem to be a quality spin.

Roxy Music: I’ve been on a Roxy Music kick lately. This cut is the last song from Siren, which is widely regarded as one of the best albums they released.

Clock Hands Struggle: These guys are an old and (presumably) now defunct band from Melbourne, FL. I never saw them play. There’s hardly anything about them on the internet. My only knowledge of this band is from this CD that I got as a freebie in a mailorder I did with No Idea oh so many years ago. But, it’s a good record and I love this song.

Fleshies: Fleshies are another band I can’t believe I’ve neglected in this forum for so long. On most days, I would say Brown Flag is my favorite record by these Oakland-based fellas.

Drag The River: At this point, I think most people are familiar with the work of country-esque duo, Chad Price and Jon Snodgrass, but I thought it would be a good idea to play this rocker from their 2008 release, You Can’t Live This Way.

Treasure Fleet: Damn. I guess this is the third song from a Recess Records release I’ve played in this podcast. What can I say? They do quality work over there in Pedro. I think it’s fair to say that Treasure Fleet is more of a project than a band. This song is from the soundtrack to the movie based on the “TF3 and the Sun Machine” novella all of which is documented for your enjoyment right here: http://www.thetreasurefleet.com/#treasurefleet. If the vocals sound familiar, perhaps it’s because you recognize them to be those belonging to Isaac from The Arrivals.

John Doe and The Old 97’s: John Doe is the only person I’m aware of who can say they appeared twice on a tribute album to their own band. This is a cut from a Knitters tribute album that came out several years ago. The Knitters themselves covered one of their own songs for this album.