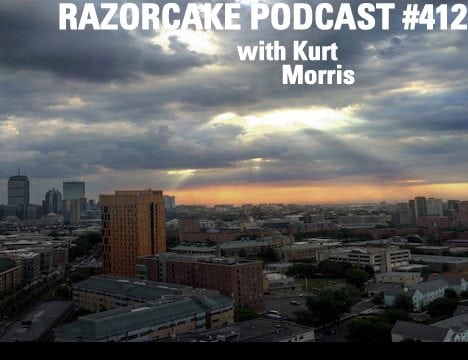 For my 50th (!) podcast for Razorcake I asked for some help from my Facebook friends. I told them to tell me a favorite song or two, or something they had been listening to a lot lately. A number of them came through, including a fair number of Razorcake contributors.Below I’ve included a sentence or two about the person who recommended each song. Thanks for your help, all! I couldn’t have done it without you.

Mara’akate – Brian suggested I play one of his bands. He played guitar in Mara’akate back when we were in college. He went to a neighboring university and I spent a lot of time hanging out with them. We also did an online zine called actionattackhelicopter.

Dead Trend – Like Brian, Michael suggested I play his band. Mike writes for Razorcake. The one time we hung out it just so happened that we saw Kurt Ballou from Converge.

Russian Circles – This one’s from Joe. He and I went to college together and lived on the same floor in the dorm for a couple years.

Mastodon – This is another track from Joe. It’s not that I like him more than the other people; I just really like his two choices for songs.

Wild Animals – Rich chose this one. He’s a reviewer for Razorcake and lives in England. I dig the fact that he’s fifty and still really into punk rock.

Dark Thoughts – Liz, also a Razorcakecontributor, chose this song. Liz is the only Razorcake contributor I know of who lives in the Boston area (where I reside). We hang out from time to time and she always makes me laugh.

The Plimsouls – Jimmy chose this oldie, but goodie. Jimmy is the workhorse of Razorcake. I see more reviews by him in an issue than anyone else. He’s also a fount of knowledge about East LA punk.

Parquet Courts – My girlfriend’s co-worker, Jess, chose this tune. We went to a house show last fall where I was by far the oldest person there. It was pretty great.

A Giant Dog – We all have that person who got us into punk; for me that was Jeremiah. He’s a walking musical encyclopedia and is always up on great new music.

Defiance, Ohio – When I specifically asked Jane for a suggestion she said, “You probably won’t like this, but what about this song by Defiance, Ohio?” Whatever. I totally dig this track.

Chamberlain – Tricia is one of my oldest friends. I’ve known her for over twenty years. She was a regular customer in the record store I worked at in high school in our hometown.

Fresh Snow & Julie Fader – Simon works with Razorcake and co-founded the LA Zine Fest. I always like her Razorcake podcasts because they make me laugh and she has a very pleasant speaking voice.