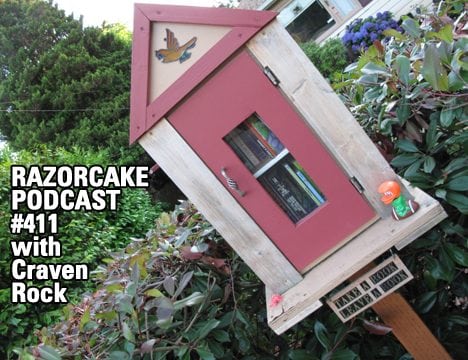 Razorcake Podcast #411 with Craven Rock and his buddy Kieran

Ever the cynic, I often espouse similar rhetoric. I’ll be the first to mention something has been done a thousand times or to call a band a weak imitation of its influences—particularly when it comes to punk or rock’n’roll. Well-trod territory, indeed. But I’m not a hater because I am truly obsessed with music; always looking for something I haven’t heard that truly excites me. It’s chasing the dragon to want music to be as fresh and exciting as it was when I was a teenager. But I can’t imagine not seeking out new music. That’s like not reading books anymore—which is something else people give up on. I haven’t given up. Sometimes, all I’m doing that’s not giving up is seeking out new music. I’m pickier. I dig deeper. I look harder. And, yes, I’m cynical.

But life without getting into music that is new to me would be a dark and cutting insult. I got to thinking about this when I looked at this set and realized there’s not a single artist on it I’ve been a fan of for more than a year or two. That wasn’t even intentional.